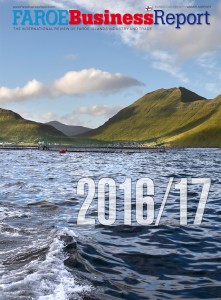 The 2016 volume, the 11th edition of the Faroe Business Report has been published and made available in digital and print formats. With a new website for the online version at www.FaroeBusinessReport.com and the circulation of the printed magazine raised by one-third to 8,000 copies, the Report has been given a fresh boost in response to rising demand.

As the website has received growing traffic over recent months, the decision was made to redesign it and migrate the content management system to WordPress, in line with the recent makeover of Nordixis.com.

An online version of the magazine has simultaneously been posted on the Issuu.com platform, at https://issuu.com/buityril7/docs/fbr16_lores_sp/.

The bulk of the increased number of printed copies is being distributed through magazine stands at Vagar Airport’s passenger terminal as well as through lounges at selected Nordic airports.

Despite the country’s tiny population of only 49,300, the Faroe Islands saw the value of its seafood exports soar to new record heights during the past year, to a total 6.744 billion dkk (906 million eur) in 2015 figures, the magazine notes, adding:

“On average, every man, woman and child in the Faroe Islands sends about 10 tonnes of protein-rich, wild-caught or farmed, fish products to foreign markets, in return receiving a handsome 136,795 dkk (18,380 eur) each. That’s pretty impressive.

“The way the Faroese invest in production and transport infrastructure to further consolidate and advance their capacities makes their continued success likely in the absence of abrupt changes beyond their control. The recent, substantial development of the country’s only airport will help facilitate more exchange, more contacts, more trade and more tourism. Similarly, the ongoing development of several Faroese seaports increases the ability of businesses throughout the country to ship their goods to overseas buyers.

“Apart from tangible goods, services are becoming an increasingly integrated and prominent part of the entire Faroese economy. Notably, information and communication technology is growing at rapid pace, so much so as to make the Faroe Islands the number one country in the world when it comes to internet connectivity—quite impressively.”